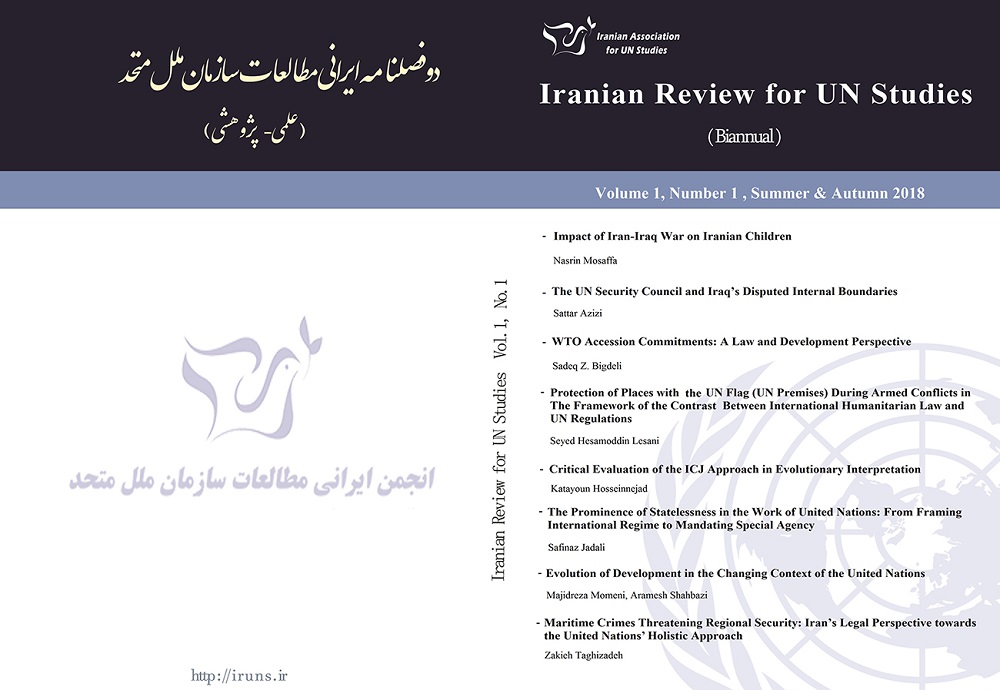 The Iranian Review for UN Studies (IRUNS) is an academic double-blind peer-reviewed Journal of the Iranian Association for UN Studies (IAUNS). The IAUNS is Iran’s leading source of independent studies on the UN and a nation-wide academic organization. IAUNS is a non-governmental organization and a scientific association active since 2000 under authorization by Iran’s Ministry of Science.

The IRUNS granted the Scientific-Research degree by the Iranian Ministry of Science, Research, and Technology. The IRUNS is mainly devoted to the publication of original research, which brings fresh light to bear on the concepts, processes and consequences of UN Work in general including the work of the main organs and the specialized agencies. It is multi-disciplinary in the sense that it encourages contributions from all relevant fields and specialized branches of UN Studies.

The IRUNS promotes academic research in all areas of the UN Studies and provides a forum for genuine and constructive dialogues between scholars from Iran and all other countries in different fields of the UN Activities with a focus on international legal issues linked to the UN system.

The IRUNS welcomes contributions by scholars from all countries and especially encourages exchanges between Iranian and non-Iranian scholars. English-language reviews of books written in Persian and other languages are also welcomed.

The Journal is published biannually in English/French.

Joint foreword by Djamchid Momtaz and Mohammad Reza Ziaii Bigdeli to the first volume of the IRUNS:

After two decades of rigorous work, the Iranian Association for UN Studies (IAUNS) – a non-governmental organization and scientific association in consultative status with the Economic and Social Council of the United Nations- is now ready to take a further step in its contribution to international academic and policy debates about the doctrinal content and institutional infrastructure of our field. With the ambition to shape and sometimes challenge the current discourse on international law and politics about the United Nations and the UN System, the Iranian Review for UN Studies (IRUNS), as the journal of the IAUNS, seeks to provide a venue for both new and traditional voices that speak of the theory and practice of the United Nations, international law, and international relations.